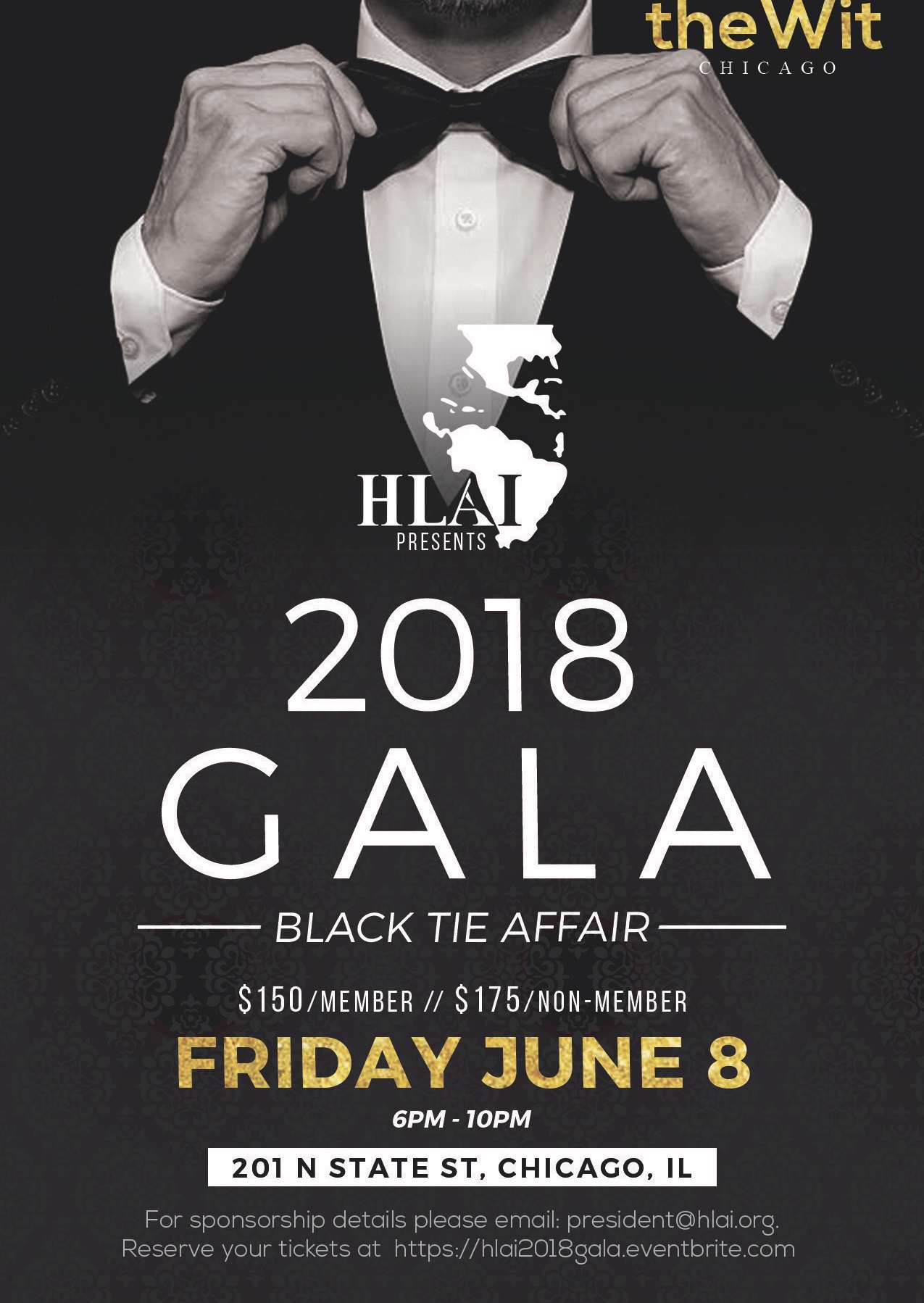 Thank you to all of this year’s Gala attendees.

The Mercedes Luque Rosales Government Lawyer Award: Martha Victoria Diaz
Martha Victoria Diaz has served the people of Chicago for over 16 years both in public service and private practice. As the chair of HLAI’s judicial evaluation committee, Martha Victoria has revamped and stream lined the judicial evaluation process. Moreover, Martha Victoria was the catalyst to formalizing the committee’s membership selection. Martha Victoria is also a member of the Illinois Local Government Lawyers Association.
Martha-Victoria is Senior Counsel for the City of Chicago’s Law Department in the Legal Information, Investigations and Prosecutions Division where she defends Freedom of Information Act challenges brought into state court as well as defends City of Chicago Departments in FOIA appeals before the Public Access Counsel and Chancery Court.

Law Student of the Year Award: Dora Cornelio
Dora Cornelio’s contributions during her tenure at Chicago-Kent College of Law were exceptional. This young lady served as president of the Hispanic Latino Law Students Association during the 2017-2018 academic year, she competed in the Hispanic National Bar Association’s Moot Court Competition, and served as the secretary for the Chicago-Kent ACLU student chapter.
Dora graduated from Chicago-Kent last month and is currently studying for the Illinois bar.

Young Lawyer of the Year Award: Stephanie Sotomayor
Stephanie is an associate at the Vrdolyak Law Group, where she primarily handles personal injury and medical practice cases. Stephanie handles all aspects of personal injury cases including arbitration, mediation, jury trials, and settlement negotiations. Stephanie is the current recording secretary of HLAI. She is a member of the Puerto Rican Bar Association and the Illinois State Bar Association.

Corporate Counsel of the Year Award: Armando M. Gamboa
Armando Gamboa is a Vice President and Corporate Counsel for the Private Placement Section of Prudential Capital Group located in Chicago. Armando provides legal support primarily to Prudential Capital Group’s Chicago-based domestic and international corporate finance teams, as well as to the international corporate finance teams in London, Paris, Milan, Frankfurt and Sydney.
Armando is a Fellow of the American College of Investment Counsel (ACIC). He is currently serving as Trustee and Vice President of the ACIC and is a past co-chair of the ACIC’s Transaction Process Management Committee. Armando also serves as co-chair of the Business Law Committee of HLAI.

Judge of the Year Award: Hon. Justice Jesse Reyes, Illinois Appellate Court, First District
The honorable Jesse G. Reyes has been a member of the judiciary for over 20 years and is currently the presiding justice of the Fifth Division in the Illinois Appellate Court’s First District. Prior to his election to the bench, Justice Reyes was an attorney for the Chicago Board of Education’s Law Department and a Senior Supervising Attorney for the City of Chicago’s Corporation Counsel’s Office.
Justice Reyes is the current President of the Diversity Scholarship Foundation and has received numerous accolades and recognitions for his contribution to the legal profession and community. Too many to count here. Not only is he a founding member of the Illinois Judges Foundation but also a founding member of our own Hispanic Lawyers Association of Illinois.
He is a role model to attorneys aspiring to be part of the judiciary. He received his B.A. from the University of Illinois at Chicago and his J.D. from John Marshall Law School.

Latina Lawyer of the Year Award: Sulema Medrano
Sulema is a partner at SmithAmudsen where she practices civil litigation. Prior to joining SmithAmundsen, Sulema worked at the Cook County State’s Attorney’s office where she divided her time as an assistant state’s attorney between the domestic violence division and the criminal appeals division.

Latino Lawyer of the Year Award: Federico Rodriguez
Federico is the principal of Rodriguez Legal Group, LLC. This practice specializes in personal injury cases. In addition, his small firm also engages in criminal defense. Federico has held numerous roles and positions within HLAI. He has served as a board member, chaired the judicial evaluations committee, co-chaired the LGBT committee, and even served as president during the 2012-2013 bar year. His service to HLAI continues today. Federico volunteers on behalf of HLAI, sponsors events, and provides internships for law students.
Federico is a member of numerous bar associations most notably, the American Bar Association (ABA) and the Chicago Bar Association (CBA). As an ABA member, Federico is a member of the Standing Committee on the American Judicial System Sub-Committee on the State Courts, Judicial Division’s John Marshall Awards Committee, and TIPS Solo and Small Firm Task Force. As a CBA member, Federico is a member of Board of Managers, Translated Chicago Bar Foundation’s “where to Go for Legal Assistance in or around Chicago” guide, assisted the Interfaith Committee’s mentoring program for at-risk students, and Investigator for the Judicial Evaluations Committee.
Most recently, Federico served as Executive Co-Chair for Alliance of Bar Association for Judicial Screening from 2013-2015. In 2015, Federico was appointed to serve on the Illinois Supreme Court’s Character and Fitness Committee.

Aguila Award: Hon. Judge Mark Lopez, Associate Judge, Circuit Court of Cook County
The honorable Mark J. Lopez has served as an Associate Judge in the Circuit Court of Cook County since 1999, where he has heard domestic relations cases for nearly 15 years. Prior to that, he was in the Child Protection Division hearing abuse and neglect cases. Judge Lopez began his career as a prosecutor in the State’s Attorney’s office and also served as an Assistant Illinois Attorney General.
Judge Lopez is an active member of the Circuit Court of Cook County’s Domestic Relations Division’s Policy and Procedures Committee, and has been active with the Illinois Family Law Study Committee and the Illinois State Bar Association’s Family Law Section. He has received numerous accolades and recognitions for his contributions to the legal profession and community. He is a member of HLAI and a mentor to countless Hispanic attorneys throughout the state of Illinois.

HLAI CHARITIES
Please consider donating to HLAI Charities today to help us raise funds to award much needed scholarships to students preparing for the LSAT and Bar Exam. We will gladly take cash, check and/or credit card donations in the envelope provided at every table. You may also donate by sending a QuickPay (Zelle) or PayPal payment to: hlaicharities@gmail.com. We will be checking totals throughout the program and will announce the name of the highest donor before the event is over tonight!

Donations to HLAI Charities are tax deductible. To receive a donor acknowledgement letter for your contribution, please email hlaicharities@gmail.com. 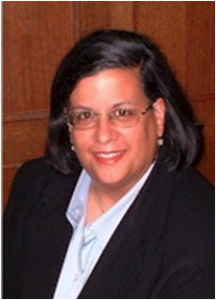 Mercedes Luque-Rosales
Mercedes Luque-Rosales grew up in the Humboldt Park Community on the west side of Chicago and attended grammar school in the Chicago Public School system. In fact, many people are surprised to learn that Mercy, as everyone calls her; only spoke Spanish when she started school and that English is her second language.
At a young age, Mercy’s parents taught her that education was the key to everything in life. Armed with this advice, Mercy worked hard and received a scholarship to Loyola University in Chicago. As a student, she worked with Loyola’s Upper Bound Program helping to encourage inner city students to attend college. Due to her commitment to public service and social justice, Ms. Luque-Rosales was awarded a Patricia Roberts Harris Fellowship to Creighton University School of Law in Omaha, Nebraska.
Upon her return to Chicago, Mercy continued her dedication to public service and worked for over 28 years with the Cook County State’s Attorneys’ Office. She rose to the position of First Chair in the Felony Trial Division and was appointed to many supervisory positions within the Office, including Chief of the Narcotics Bureau, and Chief of the Juvenile Delinquency Division. In addition, Ms. Luque-Rosales has spent her entire career trying to improve the legal profession by making it more reflective of our community at-large.
She has accomplished this goal by being one of the founders of two bar associations…the Hispanic Lawyers Association of Illinois and the National Hispanic Prosecutors Association. Ms. Luque-Rosales was elected President of HLAI in 2005, the first prosecutor to be elected to lead the organization, and in 2011 was elected the National President of the National Hispanic Prosecutors Association. Another area in which Ms. Luque-Rosales has dedicated herself to is mentoring. As a young attorney, Mercedes started visiting schools to encourage students, not only to become lawyers but also to finish their education. Twenty-six years ago, hoping to convince more inner city students to consider law as a profession, Mercy authored a mock trial program that has been presented in many Chicago schools, Boys and Girls Clubs, and Community Organizations.
Ms. Luque-Rosales has volunteered her time with the Constitutional Rights Foundation and the Make-A-Wish Foundation of Illinois. She is also a member of several bar associations, including HLAI, the Chicago Bar Association, Women’s Bar Association and Illinois Bar Association and has been honored with the JD Mentors-Mentor of the Year award; the CBA’s Vanguard Award, HLAI’s Aguila Award and the Illinois Coalition Against Sexual Assault’s Moxie Award for her work with victims of sexual assault. In 2016, in recognition of her trial skills and ethics, Ms. Luque-Rosales was inducted as a Fellow in the American College of Trial Lawyers, an organization which recognizes the top 1% of attorneys in each state..